Have you ever read through the book of Esther in one sitting? I hadn’t until recently. Blessed with children who sleep in during the summer, I grabbed my first cup of coffee and took in all ten chapters as the sun took its place in the sky. And it rocked me to devour God’s Word in such a concentration.

I know the story of Esther—you probably do too. It’s the account of how a Jewish girl raised by her cousin Mordecai in the Persian Empire took her unexpected yet clearly God-ordained place as queen, so that she could save her people from annihilation. It’s got all the grit good stories are made of: love, spunk, a hero and a heroine, a crooked villain, and a happy ending.

Not to mention it has a beautiful orphan girl that catches the eye of a king. (And I love a good Cinderella story!) But it wasn’t the rise of a lovely girl into an undeserved position that felt like balm to my anxious heart. It was the sovereign hand of the faithful God who was still in control—even as it looked as though life was spinning out of control—that fell over me like a waterfall of assurance.

Even When Things Look Bad, God Is Still in Control

Psalm 24:1 says, “The earth is the LORD’s and the fullness thereof, the world and those who dwell therein.” No place or person or situation escapes the sovereignty of God. Did you hear that? Just because a situation looks bad, that doesn’t mean God’s not in it. And the story of Esther is the perfect example.

Start with the death of Esther’s parents. We don’t know how or when they passed, we just know they did. And is there anything worse than losing a loved one? If ever there were a time to doubt God’s sovereignty, it would be here, with the loss of someone you dearly love.

But even that did not escape God’s grasp in Esther’s story. Was it hard? Um, I have no doubt. Did Esther question God’s love for her? I’m going to guess yes, but God’s affections for Esther had not wavered, and He was still very much in it.

God provided Mordecai for Esther, who, based on His unwavering commitment to the LORD as an exiled Jew in a pagan nation, likely brought Esther up in the ways of God. And such an upbringing was absolutely the blessing of God upon her life.

For “the rules of the LORD are true, and righteous altogether. More to be desired are they than gold, even much fine gold; sweeter also than honey and drippings of the honeycomb. Moreover, by them is your servant warned; in keeping them there is great reward” (Ps. 19:9–11). Indeed, there is no better way than to raise a child in the instruction of the LORD.

Trials Still Came upon Them

It’s seems right to assume that if we do right and follow God then nothing bad will happen to us, but that’s just not true. Christ was perfect, and look at the suffering God put him through. Yet Christ didn’t waver in His obedience to the Father because He knew even at the foot of the cross God was still in control.

In the same way, He was in control the day Esther was taken to the king’s harem. I wonder at Mordecai’s reaction when he first heard the edict that all beautiful young virgins be gathered for the king. Esther 2:3 says officers went through the land gathering the women, and verse 8 says, “Esther also was taken.” Was Mordecai happy about it? Considering he instructed Esther not to tell anyone she was a Jew and he could no longer protect her once she was placed in the custody of the king, I’m going to take the liberty of saying “no.”

Esther 2:11 says, “Every day Mordecai walked in front of the court of the harem to learn how Esther was and what was happening to her” (Est. 2:11). Which tells me he was anxious. (I wonder, were there other dads pacing outside the court?)

This whole thing was a big deal, and not just because she got a year of free beauty treatments. If Esther was called to the king and rejected, she wouldn’t be released to go and marry another man in order to have a family. Instead, she would live out the remainder of her days with the other girls who had also been reduced to a number instead of being cherished by a loving husband.

And after all those years of raising this precious girl, I doubt this is what Mordecai had planned for her. No wonder he was anxious, right? He didn’t have the blessing of reading the end of the story like we do. He didn’t have the assurance of knowing she’d be queen for such a time as this. They weren’t celebrating yet; they were riding the wave of uncertainty, hoping and praying it didn’t take them under.

God Was Still in Control

Even down to the small details, God was painting every stroke. Yes, Esther was named queen, which gave Mordecai all the more reason to hang out at the king’s gate. Because of this, he was in the perfect place at the perfect time to hear a plot against the king’s life and report it to his daughter.

Yet no reward was given to Mordecai at the time because God was saving it for later. (Remind me not to complain when I don’t see immediate blessing for something I do right.) Then of course it was Mordecai that Haman (the evil villain) chose to hate.

And of course, Mordecai was a Jew. And of course, Haman was an Agagite, a descendant of the Amalekites, who were ancient enemies of Israel from all the way back to Israel’s first months in the wilderness after God freed them from Egypt (Ex. 17). And do you know what Moses said upon defeating the Amalekites? He said, “The LORD will have war with Amalek from generation to generation” (Ex. 17:16). And indeed, He did!

God was obviously in control, even though life looked as though it was spinning a million miles out of orbit. Perhaps Mordecai remembered the story of Moses and that promise about the Amalekites when he heard Haman’s declaration to destroy the Jews. But even if he didn’t, God proved to be faithful to His Word.

We Have All the More Reason to Trust Him

But (and here’s the clincher) it didn’t happen that way because Esther and Mordecai sat around eating bon-bons and watching TV. The blessings they experienced were a result of putting their trust in God even as life spun out of control.

My friend, we have no need to worry, and we have every reason to trust the One who is faithful. God’s providence runs deep, and there’s no end to His sovereignty.

The LORD is a stronghold for the oppressed, a stronghold in times of trouble. And those who know your name put their trust in you, for you, O LORD, have not forsaken those who seek you (Ps. 9:9–10).

The Assurance of Our Salvation

The Worth of God’s Word 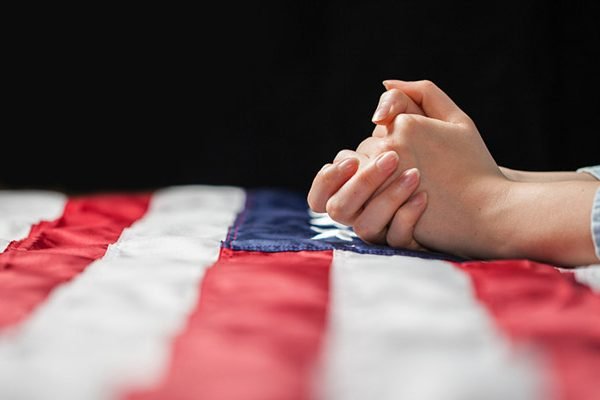 A Country That Honors God