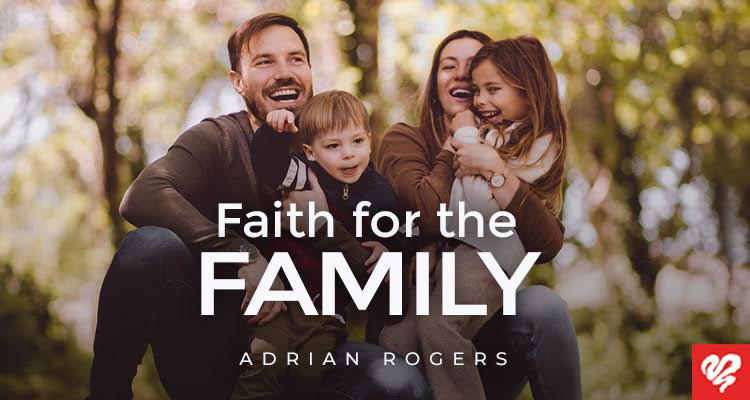 Hebrews 11 talks about champions of faith. Two were Amram and Jochebed, Moses’ parents. (See Exodus 6:20, Hebrews 11:23.) Parents of faith are the most influential people on Earth. Consider four things about faith for the family:

See God’s Purpose for Your Child’s Life
First, there is faith’s vision. Amram and Jochebed knew God had prophesied that Israel would come out of Egypt after 400 years. The clock had been ticking, and now a leader was needed. The Spirit of God spoke to their hearts and said, “Moses is the child.” (See Hebrews 11:23.)

Recognize That It’s a Spiritual Battle
Second, there is faith’s valor. Pharaoh had commanded that all the Hebrew baby boys be drowned in the Nile. (See Exodus 1:22.)

“By faith Moses, when he was born, was hidden three months by his parents, because they saw he was a beautiful child; and they were not afraid of the king’s command” (Hebrews 11:23). It was a dangerous time for Amram and Jochebed, but they realized their battle was not primarily with Pharaoh—it was a spiritual battle. (See Ephesians 6:12.) A spiritual battle is won by faith.

These are dangerous days too: liberalism in churches, humanism in education, hedonism in society. Put out fear and say, “By faith we are going to raise this child for Jesus in these dangerous days.”

Train Your Children Diligently
Third, there is faith’s venture. “Thus also faith by itself, if it does not have works, is dead” (James 2:17). Are you training your children, praying, and showing by example? Do you have them in a Bible-believing church? Faith honors God, and God honors faith.

Amram and Jochebed were not fatalists or fanatics. They did something. They made a little boat out of bulrushes and put Moses in the River Nile. Pharaoh’s daughter saw Moses, and her maternal heart melted. Moses’ sister, Miriam, stepped up and said, “I can get one of the Hebrew women to nurse this child for you.”

The princess said, “Do it.”

Miriam told her mother, “You’re going to get little Moses back!” (See Exodus 2:1-8.) How Jochebed must have poured her heart and prayers into little Moses.

When you obey God, He will move in and do something wonderful.

Teach Them Why They Believe
Fourth, there is faith’s victory.
“By faith Moses, when he became of age, refused to be called the son of Pharaoh’s daughter, choosing rather to suffer affliction with the people of God than to enjoy the passing pleasures of sin, esteeming the reproach of Christ greater riches than the treasures in Egypt; for he looked to the reward. By faith he forsook Egypt, not fearing the wrath of the king; for he endured as seeing Him who is invisible” (Hebrews 11:24-27).

How did Moses make his decision?
Evaluation. Moses saw that to be a child of the King of kings was greater than to be a grandchild of the King of Egypt.
Determination. Moses chose. The determination came from the evaluation.
Elimination. Children must have values in their hearts, a reason for not doing something. Moses’ parents put the riches of God into his heart.
You can be parents of faith—faith’s vision, faith’s valor, and faith’s venture will lead to faith’s victory.